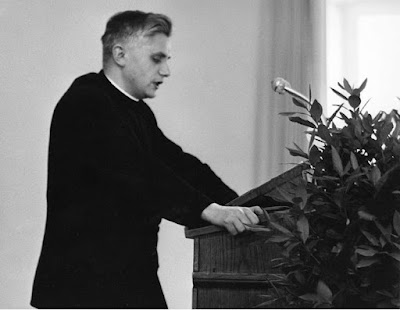 What is belief really? We can now reply like this: It is a human way of taking up a stand in the totality of reality, a way that cannot be reduced to knowledge and is incommensurable with knowledge; it is the bestowal of meaning without which the totality of man would remain homeless, on which man's calculations and actions are based, and without which in the last resort he could not calculate and act, because he can only do this in the context of a meaning that bears him up. For in fact man does not live on the bread of practicability alone; he lives as man and precisely in the intrinsically human part of his being, on the word, on love, on meaning. Meaning is the bread on which man, in the intrinsically human part of his being, subsists. Without the word, without meaning, without love, he falls into the situation of no longer being able to live, even when earthly comfort is present in abundance. Everyone knows how sharply this situation of "not being able to go on any more" can rise in the midst of outward abundance. But meaning is not derived from knowledge. To try to manufacture it in this way, that is, out of the provable knowledge of what can be made, would resemble Baron Munchausen's absurd attempt to pull himself up out of the bog by his own hair. I believe that the absurdity of this story mirrors very accurately the basic situation of man. No one can pull himself up out of the bog of uncertainty, of not being able to live, by his own exertions; nor can we pull ourselves up as Descartes still thought we could, by a cogito ergo sum, by a series of intellectual deductions. Meaning that is self-made is in the last analysis no meaning. Meaning, that is, the ground on which our existence as a totality can stand and live, cannot be made but only received.