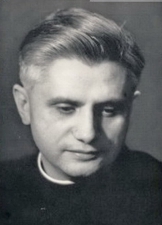 Man's natural inclination draws him to the visible, to what he can take in his hand and hold as his own. He has to turn around inwardly in order to see how badly he is neglecting his own interests by letting himself be drawn along in this way by his natural inclination. He must turn around to recognize how blind he is if he trusts only what he sees with his eyes. Without this change of direction, without this resistance to the natural inclination, there can be no belief. Indeed belief is the conversion in which man discovers that he is following an illusion if he devotes himself only to the tangible.