We have a strange illusion that mere time cancels sin. I have heard others, and I have heard myself, recounting cruelties and falsehoods committed in boyhood as if they were no concern of the present speaker’s, and even with laughter. But mere time does nothing either to the fact of to the guilt of sin.

How many young girls there are who do not see any wrongdoing in following certain shameless styles like so many sheep. They certainly would blush if they could guess the impression they make and the feelings they evoke in those who see them.

Few women know how easily men are stimulated by what they see and how much they can do to help men control their passions by feminine modesty. 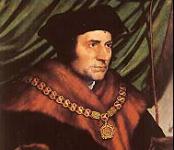 A meek man ought to behave in this way during tribulation; he should neither speak proudly himself nor retort to what is spoken wickedly, but should bless those who speak evil of him and suffer willingly, either for justice' sake if he had deserved it or for God's sake if he has deserved nothing.

Decorum and modesty are younger brothers of purity.

Nowhere does Jesus hear our prayers more readily than in the Blessed Sacrament.

They who want to win the world for Christ must have the courage to come into conflict with it.

God's Will: Nothing more, nothing less, nothing else. 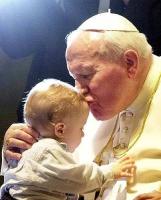 If a person's right to life is violated at the moment in which he is first conceived in his mother's womb, an indirect blow is struck also at the whole of the moral order, which serves to ensure the inviolable goods of man. Among those goods, life occupies the first place. The Church defends the right to life, not only in regard to the majesty of the Creator, who is the First Giver of this life, but also in respect of the essential good of the human person.

You can almost define modern advertising as the science of exploiting the seven capital sins.

QUOTATION: The Gospel of John

Let us not merely call him Lord, for that will not save us. For he says, “Not everyone who says to me, Lord, Lord, will be saved, but he who does what is right” (Matt. 7:21). Thus, brothers, let us acknowledge him by our actions, by loving one another, by refraining from adultery, backbiting, and jealousy, and by being self-controlled, compassionate, kind. We ought to have sympathy for one another and not to be avaricious. Let us acknowledge him by acting in this way and not by doing the opposite. We ought not to have greater fear of men than of God. That is why, if you act in this way, the Lord said, “If you are gathered with me in my bosom and do not keep my commands, I will cast you out and will say to you: ‘Depart from me. I do not know whence you come, you workers of iniquity.’”

Not to oppose error is to approve it; and not to defend truth is to suppress it; and indeed to neglect to confound evil men, when we can do it, is no less a sin than to encourage them.

QUOTATION: The Right to Life

To be actively pro-life is to contribute to the renewal of society through the promotion of the common good. It is impossible to further the common good without acknowledging and defending the right to life, upon which all the other inalienable rights of individuals are founded and from which they develop.

QUOTATION: Fear of the Lord

Not only are we missing something when fear is absent from religion, but (far worse) we are sinning grievously. For the absence of the fear of God is arrogance and pride. How dare sinners sashay up to God as a chum without first falling down in repentance and fear and calling on the Blood of Christ to save us?

We can’t have full knowledge all at once. We must start by believing; then afterwards we may be led. 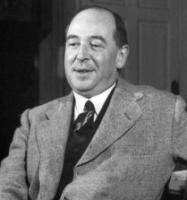 All possible knowledge, then, depends on the validity of reasoning. If the feeling of certainty which we express by words like must be and therefore and since is a real perception of how things outside our own minds really ‘must’ be, well and good. But if this certainty is merely a feeling in our own minds and not a genuine insight into realities beyond them—if it merely represents the way our minds happen to work—then we can have no knowledge. Unless human reasoning is valid, no science can be true.

We're at a time for the Church in our country when some Catholics — too many — are discovering that they've gradually become non-Catholics who happen to go to Mass. That's sad and difficult, and a judgment on a generation of Catholic leadership. But it may be exactly the moment of truth the Church needs.

The difficulty of explaining ‘why I am a Catholic’ is that there are ten thousand reasons all amounting to one reason: that Catholicism is true.

QUOTATION: The Way of the World

We live in a culture in which condoms can be handed out in schools and Bibles can’t. And I think that tells you everything you need to know about our society.

It was God who brought Eve to Adam and gave her to him as his wife, and it is God, my friends, who with his invisible hand bound the knot which united you and gave you to one another; therefore give good heed that you cherish a love which is holy, sacred and divine.

We have only short moments of this life to work for God's glory. The devil knows this and this is why he tries to make us waste time in useless things. O, let us not waste our time! Let us save souls!

QUOTATION: The Sense of Sin

A recovery of the old sense of sin is essential to Christianity. Christ takes it for granted that men are bad. Until we really feel this assumption of His to be true, though we are part of the world He came to save, we are not part of the audience to whom His words are addressed. We lack the first condition for understanding what He is talking about. And when men attempt to be Christians without the preliminary consciousness of sin, the result is almost bound to be a certain resentment against God as to one always inexplicably angry. Most of us have at times felt a secret sympathy with the dying farmer who replied to the Vicar’s dissertation on repentance by asking ‘What harm have I ever done to Him?’ There is the real rub. The worst we have done to God is to leave him alone—why can’t He return the compliment? Why not live and let live? What call has He, of all beings, to be ‘angry’? It’s easy for him to be good!

Now at the moment when a man feels real guilt—moments too rare in our lives—all these blasphemies vanish away. Much, we may feel, can be excused to human infirmities, but not this—this incredibly mean and ugly action which none of our friends would have done, which even such a thorough-going little rotter as X would have been ashamed of, which we would not for the world allow to be published. At such a moment, we really do know that our character, as revealed in this action, is, and ought to be, hateful to all good men, and, if there are powers above men, to them. A God who did not regard this with unappeasable distaste would not be a good being. We cannot even wish for such a God—it is like wishing that every nose in the universe were abolished, that smell of hay or roses or the sea should never again delight any creature, because our own breath happens to stink.

When we merely say that we are bad, the ‘wrath’ of God seems a barbarous doctrine; as soon as we perceive our badness, it appears inevitable, a mere corollary of God’s goodness. To keep ever before us the insight derived from such a moment as I have been describing, to learn to detect the same real inexcusable corruption under more and more of its complex disguises, is therefore indispensable to a real understanding the Christian faith. This is not, of course, a new doctrine. I am attempting nothing very splendid in this chapter. I am merely trying to get to my reader (and, still more, myself) over a pons asinorum—to take the first step out of fools’ paradise and utter illusion.
‎
--C.S. Lewis, The Problem of Pain 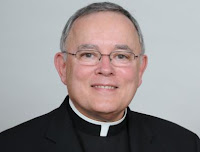 It is ironic. Many of us spend a good deal of our lives accumulating stuff. What the "stuff" is will differ from person to person. Yet at the end of our lives, it's all finally the same junk. It piles up in bookcases, in garages, in boxes in the attic, in the secret places of our souls. As life's evening sets in, we see the need to begin to detach. The things we've accumulated are distractions. They should become less and less important. We need to strip them away--the layers of our life--until, at the very end, all that is left is God and us. "Blessed are the poor in spirit, for theirs is the kingdom of Heaven" (Matthew 5:3). Thus, I suspect that poster--"Whoever dies with the most toys, wins"--should really read, "Whoever dies with no toys, wins."

In a world that has lost a sense of sin, one sin remains: Thou shalt not make people feel guilty (except, of course, about making people feel guilty). In other words, the only sin today is to call something a sin.

You cannot please both God and the world at the same time. They are utterly opposed to each other in their thoughts, their desires, and their actions.

Sometimes people will say 'Well I've outgrown my faith.' I've met eight zillion people who have said 'Yeah I used to be Catholic...' Well what are you now? And they may be Buddhist, or who knows what? And they sometimes say 'Well I outgrew my Catholic faith, I became more sophisticated, I became more educated.' There's something I have found. Now I have some education. I have earned five university degrees, most of them with highest honors. I'm not bragging, I'm just saying that to let you know that I respect education. I have a high regard for education. But in my many years around the education establishment, I was given a great revelation by God, and the revelation is: a lot of people done been educated into imbecility.

Kindness has converted more people than zeal, science, or eloquence. 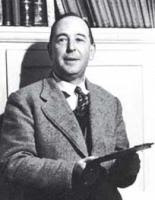 It would seem that Our Lord finds our desires not too strong, but too weak. We are half-hearted creatures, fooling about with drink and sex and ambition when infinite joy is offered us, like an ignorant child who wants to go on making mud pies in a slum because he cannot imagine what is meant by the offer of a holiday at the sea. We are far too easily pleased. 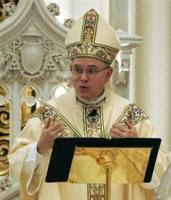 If we really believe that abortion is an intimate act of violence – and of course, it is – then we can’t aim at anything less than ending abortion. It doesn’t matter that some abortions have always occurred, or that some will always occur. If we really believe that abortion kills a developing, unborn human life, then we can never be satisfied with mere ‘reductions’ in the body count.