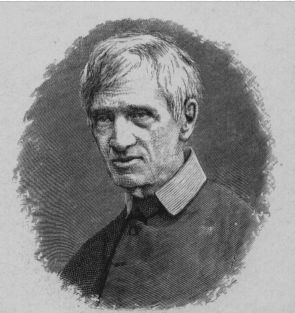 Protestants, however much they may profess to deduce from Scripture, really do not, but colour their sense of the Scripture text by their own previous views, which they gained by what they learned at School. The present set of teachers have not in fact gained their views from a careful examination of the sacred text, but they teach what they were once taught, and those who taught them were taught by their own catechists, ministers, and school masters in turn, and they again by a former generation, and so back to the Reformation.

I don't mean to say that no individual examines Scripture for himself, but I am speaking of the mass of Protestants -- and even those who do examine to the best of their power cannot escape the bias of those impressions which were made on them by their parents, associates etc when they were young.

Thus, when Scripture says, 'Whoso eateth my flesh etc.' (John vi) they say 'This is a figure of speech etc., All sensible men are agreed on this --' that is to say, all Protestants. Scripture says 'The Church, the pillar and ground of the Truth,' and they say 'This means the Apostles and those who were about them.' Scripture says 'Anoint the sick with oil in the name of the Lord'; they say 'This was a temporary rite.' Who told them all this? they will say, 'It stands to reason' -- that means (in the case of most men,) 'I never heard any other interpretation -- any other seems to me strange;' of course, every thing is strange to those who are not accustomed to it. And so on.

. . . both Catholics and Protestants teach religion by a tradition, tho' Protestants cannot get themselves to acknowledge it . . . His reasonings which he teaches to the child are traditional and 'instilled,' as you truly say.