QUOTATION: What God Says About Crosses 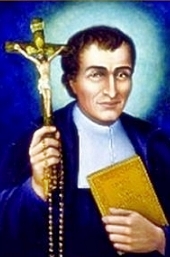 --St. Louis de Montfort, Letter to the Friends of the Cross