QUOTATION: Followers of Jesus vs. The Worldly 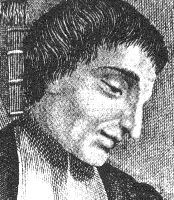 My dear brothers and sisters, there are two companies that appear before you each day: the followers of Christ and the followers of the world. Our dear Saviour's company is on the right, climbing up a narrow road, made all the narrower by the world's immorality. Our Master leads the way, barefooted, crowned with thorns, covered with blood, and laden with a heavy cross. Those who follow him, though most valiant, are only a handful, either because his quiet voice is not heard amid the tumult of the world, or because people lack the courage to follow him in his poverty, sufferings, humiliations and other crosses which his servants must carry all the days of their life.

On the left hand is the company of the world or of the devil. This is far more numerous, more imposing and more illustrious, at least in appearance. Most of the fashionable people run to join it, all crowded together, although the road is wide and is continually being made wider than ever by the crowds that pour along it like a torrent. It is strewn with flowers, bordered with all kinds of amusements and attractions, and paved with gold and silver.

On the right, the little groups which follow Jesus speak about sorrow and penance, prayer and indifference to worldly things. They continually encourage one another saying, "Now is the time to suffer and to mourn, to pray and do penance, to live in retirement and poverty, to humble and mortify ourselves; for those who do not possess the spirit of Christ, which is the spirit of the cross, do not belong to him. Those who belong to Christ have crucified all self-indulgent passions and desires. We must be true images of Christ or be eternally lost."

"Have confidence," they say to each other. If God is on our side, within us and before us, who can be against us? He who is within us is stronger than the one who is in the world. The servant is not greater than his master. This slight and temporary distress we suffer will bring us a tremendous and everlasting glory. The number of those who will be saved is not as great as some people imagine. It is only the brave and the daring who take heaven by storm, where only those are crowned who strive to live according to the law of the Gospel and not according to the maxims of the world. Let us fight with all our strength, let us run with all speed, that we may attain our goal and win the crown.

Such are some of the heavenly counsels with which the Friends of the Cross inspire each other.

Those who follow the world, on the contrary, urge each other to continue in their evil ways without scruple, calling to one another day after day, "Let us eat and drink, sing and dance, and enjoy ourselves. God is good; he has not made us to damn us. He does not forbid us to amuse ourselves. We shall not be damned for so little. We are not to be scrupulous. 'No, you will not die'."

--St. Louis de Montfort, Letter to the Friends of the Cross