QUOTATION: Never Jesus Without the Cross 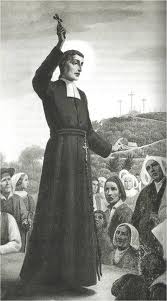 Never the Cross without Jesus, or Jesus without the Cross. Through his dying upon it the Cross of ignominy became so glorious, its poverty and starkness so enriching, its sorrows so agreeable, its austerity so attractive, that it became as it were deified and an object to be adored by angels and by men. Jesus now requires that all his subjects adore it as they adore him. It is not his wish that the honour even of a relative adoration be given to any other creature however exalted, such as his most Blessed Mother. This special worship is due and given only to his dear Cross. On the day of the last judgement he will bring to an end all veneration to the relics of the saints, even those most venerable, but not to those of his Cross. He will command the chief Seraphim and Cherubim to collect from every part of the world all the particles of the true Cross. By his loving omnipotence he will re-unite them so well that the whole Cross will be re-formed, the very Cross on which he died. He will have his Cross borne in triumph by angels joyfully singing its praises. It will go before him, borne upon the most brilliant cloud that has ever been seen. And with this Cross and by it, he will judge the world. Great will be the joy of the friends of the Cross on beholding it. Deep will be the despair of its opponents who, not being able to bear the brilliant and fiery sight of this Cross, will plead for the mountains to fall upon them and for hell to swallow them.