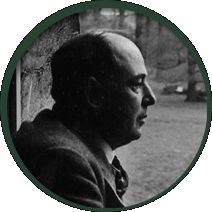 Above all, you must be rid of the hideous idea, fruit of a widespread inferiority complex, that pomp, on the proper occasions, has any connexion with vanity or self-conceit. A celebrant approaching the altar, a princess led out by a king to dance a minuet, a general officer on a ceremonial parade, a major-domo preceding the boar’s head at a Christmas feast — all these wear unusual clothes and move with calculated dignity. This does not mean that they are vain, but that they are obedient; they are obeying the hoc age which presides over every solemnity. The modern habit of doing ceremonial things unceremoniously is no proof of humility; rather it proves the offender’s inability to forget himself in the rite, and his readiness to spoil for every one else the proper pleasure of ritual.