QUOTATION: The Abolition of Religion in the Public Square 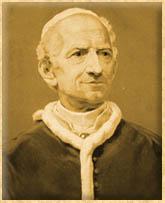 [O]nce we ascribe to human reason the only authority to decide what is true and what is good, and the real distinction between good and evil is destroyed; honor and dishonor differ not in their nature, but in the opinion and judgment of each one; pleasure is the measure of what is lawful; and, given a code of morality which can have little or no power to restrain or quiet the unruly propensities of man, a way is naturally opened to universal corruption. With reference also to public affairs: authority is severed from the true and natural principle whence it derives all its efficacy for the common good; and the law determining what it is right to do and avoid doing is at the mercy of a majority. Now, this is simply a road leading straight to tyranny. The empire of God over man and civil society once repudiated, it follows that religion, as a public institution, can have no claim to exist, and that everything that belongs to religion will be treated with complete indifference. Furthermore, with ambitious designs on sovereignty, tumult and sedition will be common amongst the people; and when duty and conscience cease to appeal to them, there will be nothing to hold them back but force, which of itself alone is powerless to keep their covetousness in check. Of this we have almost daily evidence in the conflict with socialists and members of other seditious societies, who labor unceasingly to bring about revolution. It is for those, then, who are capable of forming a just estimate of things to decide whether such doctrines promote that true liberty which alone is worthy of man, or rather, pervert and destroy it.