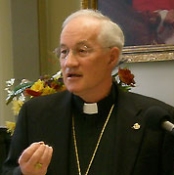 Our culture, strongly influenced by the media, almost no longer believes in that deep and enduring love that is the foundation of the family’s stability. It presumes itself to be free and liberating, but it multiplies the phenomena of dependence: drug addiction, pornography, alcoholism, tobacco, superstition, fetishism, satanic cults, etc. We think ourselves free when we make love to any one, but the result is the failure of love and bitter disenchantment, which sometimes causes despair and even suicide. We avoid these ills by the mastery of self, chastity and prayer.