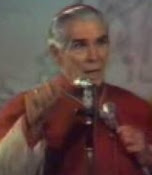 In the parable of the Good Samaritan it is said that a priest and a Levite passed by the wounded man and help was given him by one of another race-namely, the Samaritan. We do not know whatever happened to the priest and the Levite, but it is very likely that they went into Jerusalem and reported the condition of the dying man to a social service agency.