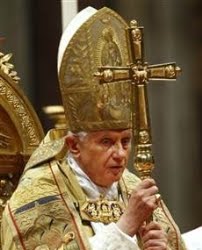 In support of the claim that Newman's concept of conscience matched the modern subjective understanding, people often quote a letter in which he said — should he have to propose a toast — that he would drink first to conscience and then to the Pope. But in this statement, "conscience" does not signify the ultimately binding quality of subjective intuition. It is an expression of the accessibility and the binding force of truth: on this its primacy is based. The second toast can be addressed to the Pope because it is his task to demand obedience to the truth.