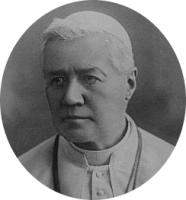 That the State must be separated from the Church is a thesis absolutely false, a most pernicious error. Based, as it is, on the principle that the State must not recognize any religious cult, it is in the first place guilty of a great injustice to God; for the Creator of man is also the Founder of human societies, and preserves their existence as He preserves our own. We owe Him, therefore, not only a private cult, but a public and social worship to honor Him. Besides, this thesis is an obvious negation of the supernatural order. It limits the action of the State to the pursuit of public prosperity during this life only, which is but the proximate object of political societies; and it occupies itself in no fashion (on the plea that this is foreign to it) with their ultimate object which is man's eternal happiness after this short life shall have run its course. But as the present order of things is temporary and subordinated to the conquest of man's supreme and absolute welfare, it follows that the civil power must not only place no obstacle in the way of this conquest, but must aid us in effecting it. The same thesis also upsets the order providentially established by God in the world, which demands a harmonious agreement between the two societies. Both of them, the civil and the religious society, although each exercises in its own sphere its authority over them. It follows necessarily that there are many things belonging to them in common in which both societies must have relations with one another. Remove the agreement between Church and State, and the result will be that from these common matters will spring the seeds of disputes which will become acute on both sides; it will become more difficult to see where the truth lies, and great confusion is certain to arise. Finally, this thesis inflicts great injury on society itself, for it cannot either prosper or last long when due place is not left for religion, which is the supreme rule and the sovereign mistress in all questions touching the rights and the duties of men. Hence the Roman Pontiffs have never ceased, as circumstances required, to refute and condemn the doctrine of the separation of Church and State.